Excalibur is one of the most versatile warframe in the entire game and the warframe that I started with - the Excalibur. Excalibur is the OG frame, he is the face of the game, and he’s gone through so many changes over the years. I’m kind of surprised that I only have five forma on him. He even went through a full rework about two years ago which has made him even better than before. 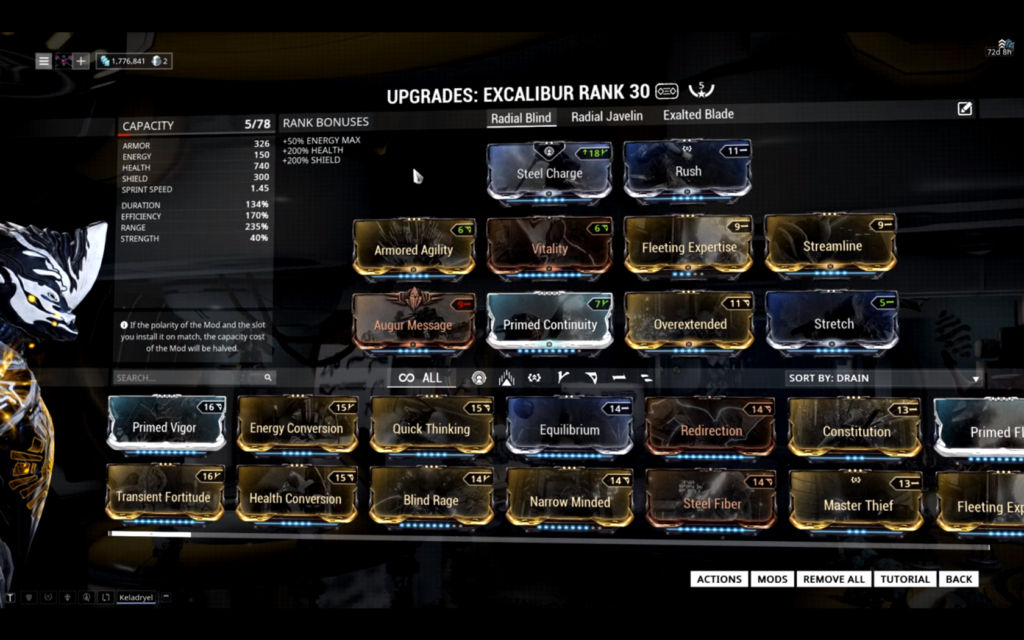 So, for Excalibur Radial Blind Build, I’m using Steel Charge as its aura and this is great because of two things. Number one it’s the Aura that gives you the highest capacity so we have more capacity to play around with which is always nice. But it also increases your melee damage and this is great for when you want to do some focus farming because there’s a higher chance you were one shot the enemies when you hit them. Now, for the Exilus Slot, you can use whatever you want but I’m personally using Rush here so I can get more sprint speed for focus farming. I’m then getting even more sprint speed from Armored Agility which also adds a little bit of armour which is always nice and I’m using Vitality for a little bit of extra health. Though you don’t really need this because most of the enemies will be blinded. And then I’m using Fleeting Expertise that’s two ranks from the top to save on some duration and Streamline for 170% efficiency.This makes Radial Blind super cheap and spammable.

And then using Stretch and Overextended which basically guarantees that I’m gonna blind everything even in big rooms. And we top it off with Primed Continuity and Augur Message which is gonna balance out Fleeting Expertise and give us some extra duration so the enemies are blinded for a decent amount of time. Now, you know this can be used as sort of a ghetto focus farming setup and it works pretty well. It’s not as good as something like Equinox because in order to blind enemies you have to have a line of sight of them which means they have a line of sight of you. So, they could see you and break multiplier. There’s also a short cooldown on Radial Blind which means you can’t spam it. So, every now and then you won’t be able to blind enemies that are standing right in front of you.

For What I Use Excalibur Radial Blind Build

Now, the thing I really like about this Excalibur Build is that even though it can be used as sort of a ghetto focus farming setup it is still pretty good even outside of that. You can just run missions with this and provide stupid amounts of crowd control over a very large area. You don’t even have to use a massive melee weapon like I’m using with my Guandao that has a range riven mod. You can carry around a Covert Lethality dagger and just do finishes on the enemies because Radial Blind does open them up to finishers which provides a very easy way to one-shot everything as long as you can blind it.

And finally, the reason why I’m not using the augment(Radiant Finish) for Radial Blind which increases finisher damage is that number one you can just run a Covert Lethality dagger and one-shot everything. And number two, it is affected by power strength and you can’t really get good duration, good range, and good efficiency while also getting good strength. So, I can definitely go and crowbar the augment in somehow and it will cripple the build in other ways. 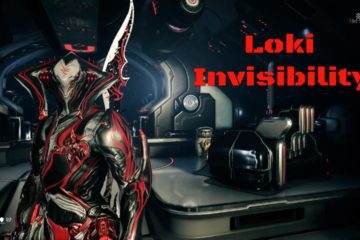 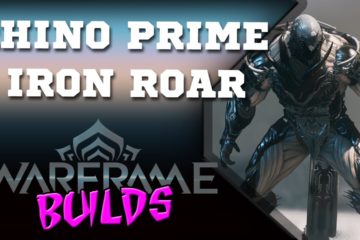 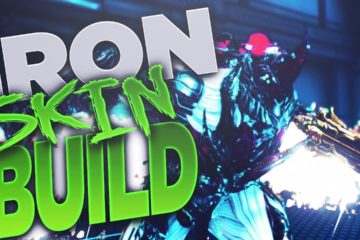