Now, unlike the primary or the secondary syndicate weapons the melee syndicate weapons don’t have a syndicate proc. Instead, each one of the melee weapons has a unique mechanic that was suggested by the community. And the one DE chose for the Rakta Dark Dagger is that if you hit an enemy that has a radiation on them it will take 5% of the damage done to the enemy and will give it to you as shields and over shields. Additionally, if you’re in full melee mode with the Rakta Dark Dagger you can get closer to enemies before they notice you. So, it reduces your visibility by a little bit. And unfortunately, both of these bonuses sound much cooler than they really are. And personally, I would not recommend focusing on these bonuses because I didn’t really like this weapon until I started ignoring them. 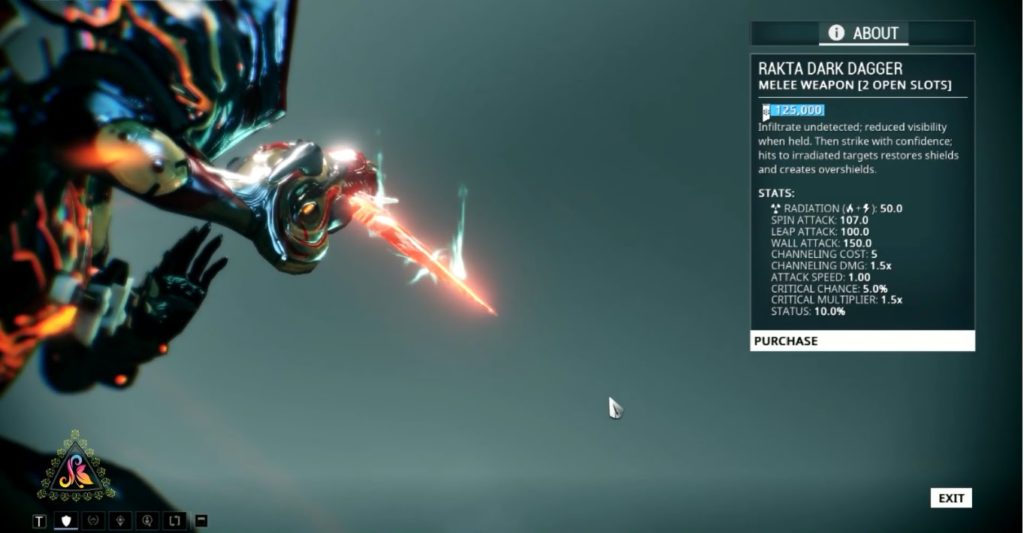 Now, once again I have a budget and a big boy build let’s just call them and they are both zero forma. So, for the budget build, we’re gonna start off by adding Homing Fang. This is my preferred stands for the Dark Daggers because it is a really good button mash combo and it’s kind of the most important thing about daggers because if you add a little bit of attack speed pooling of the combos is really hard. And since Homing Fang has a really good combo that gives you a lot of mobility it is the preferred stance for me. Then to add a little bit of damage we’re gonna add Pressure Point. Then to substitute Covert Lethality, we’re gonna run Finishing Touch. And this is actually a pretty good and cheap substitute for Covert Lethality. It’s also very easy to get because it drops on Corrupted Butchers and Lancers. So, all you have to do if you don’t have it is a run Void for a little bit and it’s really gonna help you finish off those big beefy units like Bombards. 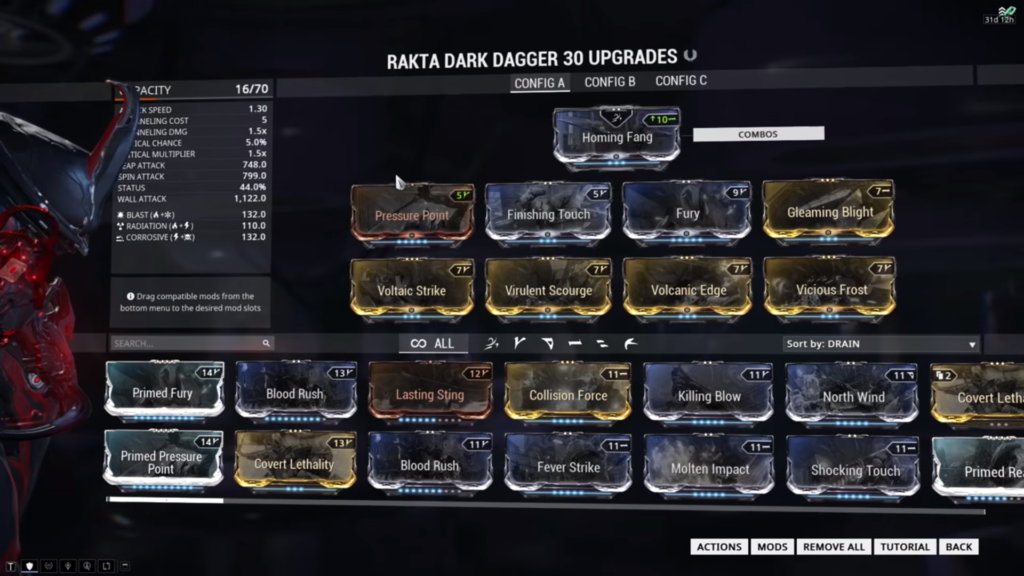 Then we have Fury to add a little bit of attack speed and this just helps the dagger overall it means you do more DPS if you’re just swinging the thing and it also speeds up the finisher animation. And then we’re gonna add a Gleaming Blight which is an augment for the dark daggers that you can get from the Red Veil syndicate if you’re the rank of revered or higher and cost 25,000 standing. And we’re using this augment just to get the blight effect the status chance may look really nice. I mean plus 100% status chance is really nice but in reality all it does is just add 10 percent raw status chance nothing more nothing less. The blight effect on the other hand is really cool because once you get enough affinity while wielding the dark dagger in full melee mode it will do an explosion dealing 1000 viral damage to all enemies around you, proc viral on them which will cut their health in half and will store 25% of your base energy and temporarily increase your movement speed by 10%.

And finally we’re gonna add four dual stat modes and they’re always the same for all the factions. So, Voltaic Strike and Virulent Scourge for corrosive damage and Volcanic Edge and Vicious Frost for blast damage. And this is a very deadly combination because we have radiation from the Rakta Dark Dagger we have corrosive and blast from the dual stat mods and we have viral from the Gleaming Blight. And the cool thing here is that you have a lot of mod capacity left. So, if you don’t have all of these dual stat mods you can sacrifice a little bit of status chance and replace them with a 90% elemental mods instead.

Rakta Dark Dagger build that I use

Now, let’s check out the build that I actually use on the Rakta Dark Dagger. So, we’re once again gonna start off by adding the Homing Fang stance which is my preferred stance as I’ve said already. We’re gonna add Primed Pressure Point for a lot more damage and we’re gonna add Covert Lethality. Now, Covert Lethality is awesome because if you can get a finisher off on an enemy it will one shot them regardless of their health armor or shield but it also adds 100 raw melee damage to your normal melee swing. So, it actually makes the weapon hit harder even if you’re not using finishers. Then we’re gonna add the primed version of the Fury mod which gives a little more attack speed and Gleaming Blight once again. And just like we did with the budget build we’re gonna add a Voltaic Strike and Virulent Scourge for corrosive damage and Volcanic Edge and Vicious Frost for blast damage. 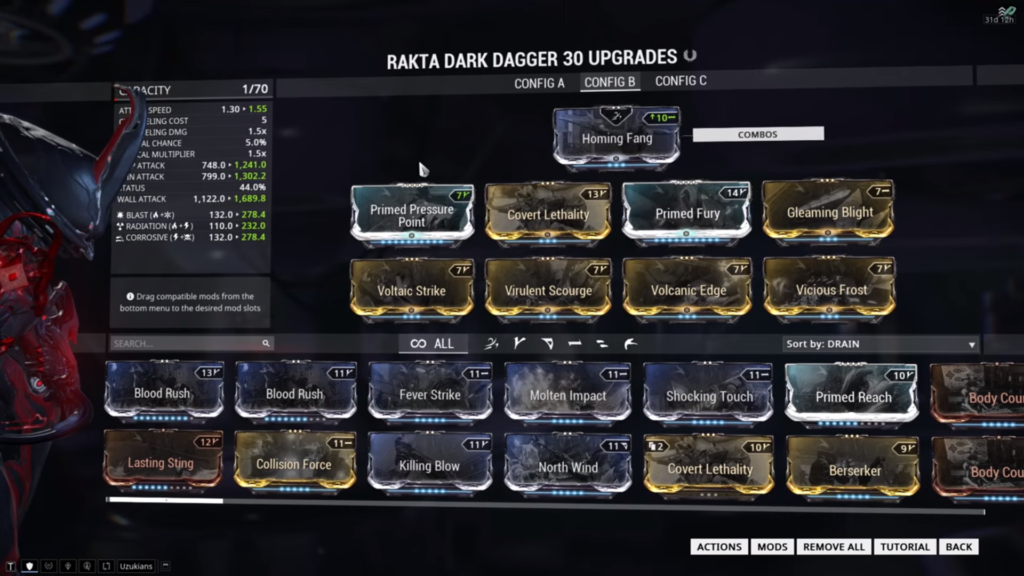 a) the Radial Blind from blight

And radiation is probably the worst thing you can proc on the enemy if you’re trying to stealth kill them and you fail. I’ve done plenty of stealth endless runs where I’ve died as a consequence of me procing radiation on an enemy that was too close to me.

Now, as I’ve said earlier I didn’t really enjoy this weapon until I started ignoring the unique effect where if you hit an enemy that has a radiation proc on them you will gain shields. And that’s because well to get a decent amount of shields from the enemy you can’t do a lot of damage. Sounds annoying. Reducing the damage this weapon does so that I can proc radiation on the enemy and then hit them a couple of times to get some over shields and after a while, I realize how dumb that actually was. So, I slapped on this build instead and out of nowhere, I was suddenly having loads of fun. I’ve realized how dumb the bonuses are and how they contradict each other. Because the first one is a stealth bonus where the enemies have to be closer to you to see you. And the second one encourages you to hit the enemies get radiation on them and then hit them again just doesn’t make sense. I think it would make more sense if the enemies would have to be closer to you as it is right now but you got the shield bonus if you go to finish her off on an enemy.

So, I would definitely not recommend focusing on the bonuses and I would instead use the build that I’m using which basically turns the weapon into a status monster. I love what this build can do. It has the utility of a status build. I mean you can confuse the enemies with radiation, you can strip away their armor with corrosive damage, knock them on their arse with blast damage, and once you get enough affinity you will cut their health in half with the viral proc. And at the same time if you’re using a warframe that can reliably open the enemies up for a finisher you can one-shot anything regardless of their health armor or shields. So, the Rakta Dark Dagger overall is good and I really like it but the bonuses just don’t make sense to me, unfortunately. I mean yeah sometimes you will get a few shields because you will hit the enemy twice and the first hit will apply radiation and the second one will siphon a few shields but that’s about it for that one. And if you’re running endless missions the second bonus where the enemies have to be closer to you to see you is completely useless because in endless missions the alarms are active from the start.

So, overall a good weapon that I would still recommend but only if you want to build the quad status monster build. Anything else I would not really recommend it because the only thing that matters for Covert Lethality is attack speed and Ceramic Dagger which is a much cheaper dagger has the same attack speed as the Rakta Dark Dagger. So, it’s basically just as good. And that’s pretty much it for the article. I thank you very much for reading as always and I will see you next time. Bye-bye. 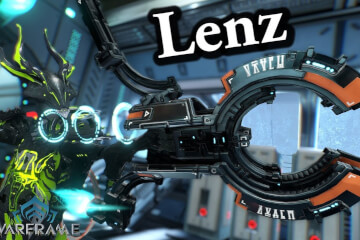 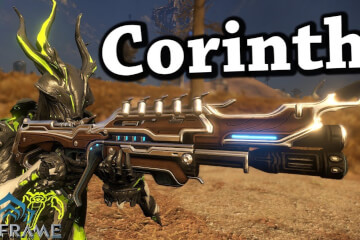 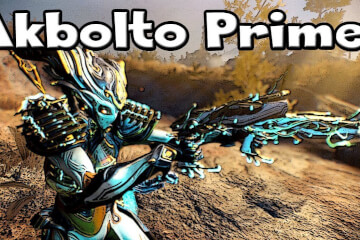