For about a year now we saw the concept art and we’ve been waiting for years since that devstream. So, right now one of the things that I will say before we begin before we take a look at the review and also look at the stats is that a lot of you should not judge this shotgun based on what we see in other weapons in the game. A lot of people tend to judge every single gun and expect them to perform like the Tigris. So, this is not going to perform like it and we will take a look at the stats and also hopefully that will help you determine if it is up to par or if it is somewhere around average.

The Corinth is a dual fire mode shotgun and just like you’ve seen in weapons like the Pandero and the Euphona Prime this one also functions and works in a way that is similar. One side of this weapon functions like a regular shotgun and the other side functions more like a grenade launcher. And just like a lot of you will guess weapons like this seems to be split in between critical chance and also status chance because DE seems to be going with that logic lately. I don’t know if I like it or not but we will see that with this weapon.

Now the Buckshot side which is a shotgun size has 30% critical chance with 2.8 multiplier. It has 12% status chance which is basically nothing if you really think about it. And also it has an almost spread between impact and slash and this weapon is going to be primarily puncture because the puncture damage comes with 226.8. So, there is something that we can see as a little bit of a good thing because the Tigris Prime is a slash weapon and this one is leaning towards the puncture side. So, it might be a favor or something that we might see to be much of a favor for a lot of us when it comes to damage considering that DE is reviewing and trying to rework and rebalance IPS.

Now, when it comes to the Air Burst side which is the grenade side it comes with 4% critical chance which is basically pointless. And it also comes with 28% status chance which is the main deal. At that 28% you can push it somewhere around 99 or if you have a riven mod for it you might be able to get it to 100. Now, this side also deals 100 impact damage and also 404 blast damage. They might as well just make it 400 but they made it 404 for some reason. Now I would have preferred a slash damage when it comes to that blast or I would have preferred something that does maybe a little bit of a puncture instead of just impact and blast I would have preferred slash and blast or puncture and blast because that will make it deal a lot more damage and also much more viable. Now, this is also the main reason why the air burst is mostly good for crowd control because it’s mostly impact and it will not work really well the way you would expect it to when you are going with high levels. Now it will kill low levels easily you just have to shoot it trigger it and everything will just melt in one sitting. Also, in most cases, as the enemies begin to scale then it begins to ragdoll them and that is something that we really do not want. I’ve tested this and I say that after level 50 it begins to ragdoll enemies a lot and I do not like that.

Now the other thing about this grenade is also the fact that it doesn’t detonate unless it travels for about 20 meters. This means you cannot use it in close quarters you will literally have to shoot it up in the air and just hope that it travels 20 meters or maybe it hits something and then detonates. If it doesn’t travel that far then you are not going to see an explosion. Everything will drop down and fall off and it makes it so painful mainly because the radius of that explosion is also at 8 meters which is something that I’m thinking that DE should have buffed it to maybe around 15 or maybe at least something around 12 to make it a little bit much useful. But I’m hoping to see some changes maybe push it around 10. It just gives it around an even number. So, you will basically have to use a Jet Stream Zephyr in most cases or you can try using Volt as well that might also be working for you. That might actually work a lot much better because I also tested this on Volt as well.

Now the shotgun side can also become painful because of the fire rate. It is a little bit slower. However, the critical chance for this shotgun side meets it a lot much better. 30% critical chance is very high. It is very huge and it makes it a lot much better when it comes to late-game and that is something that we can see to be very helpful in the most situation. And whenever you get into those high-level situations this will really help you out.

Now the great thing about the Corinth is that you can also fire it while reloading. You don’t really have to reload the entire magazine before you can fire. You can put in one bullet and still be able to fire this weapon. So, that is also one of the really cool and great things about it. And I’m actually glad that features like that are still available in Warframe.

Now like most weapons in the game a lot of people tend to test them against high-level targets and that is what I’ve also done as well. So, I tested the Corinth against level 130 to see how much they perform if it deals a lot of damage kills them faster or if it does a little bit of CC. And I will say it is really good but not amazing as you will say on a Tigris Prime level.

I actually ended up putting two formas on mine Corinth. Mainly because two formas is where it is at. Now if you have a riven mod you can bump it up to maybe three but unless you put two formas on it you will not really have the versatility that you need. And that is what makes this build really work for me. Now I’m using my Vigilante Volt with my vigilante mod setup. And that actually also helps me as well with a critical chance in this setup gives me orange crits from time to time and also one of the main reason that makes me really appreciate this build and it also makes me appreciate this setup. 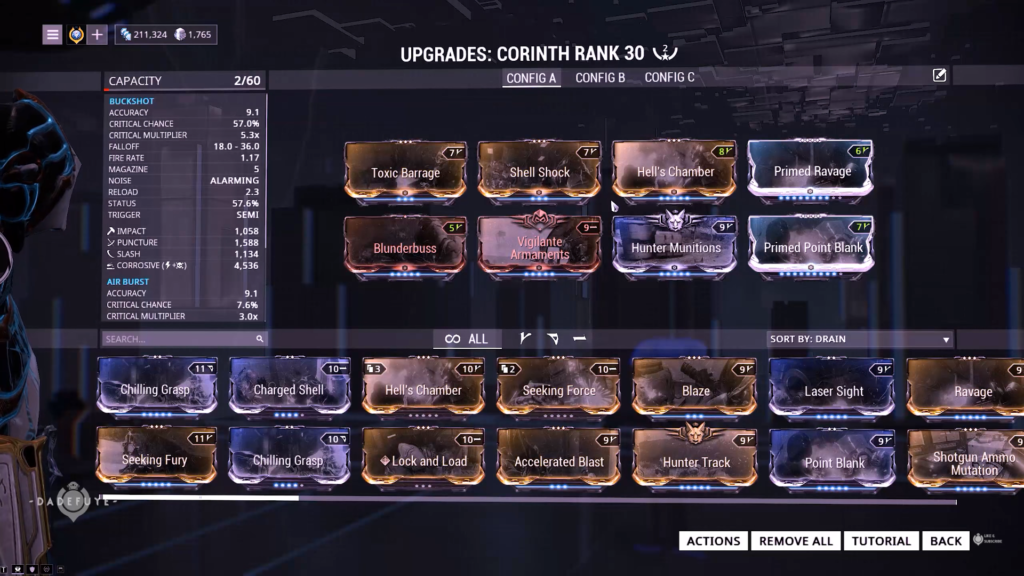 Now, if you’re not going somewhere around or maybe higher than level 50 then you can do away with a Hunter Munitions but I am actually using Hunter Munitions mainly because of that slash proc and I need that to deal a lot of damage when I am using the buckshot side. Now, as far as the blast side I really don’t care much about it. I only or mostly use that for crowd control because that is the main use of it. In most cases, you will not really be able to deal damage. It is just impact and blast. And most high-level enemies are not going to take any damage from impact and blast. Well, maybe a few damage but not a lot of damage. Now, I can say that this setup is not really bad mainly because I’m able to take down a level 130 in few shots and I also didn’t have to empty the entire magazine just for one enemy. But once again this is not a Tigris Prime and I advise a lot of you guys not to look at it or give it the expectation of a Tigris Prime or Tigris. Let’s just be honest with ourselves we can hope and pray that this stays the same or gets a lot much better when damage 2.5 comes out.

Now, the Corinth is a mastery rank 10 weapon but the good news about that is also the fact that you can buy the blueprint at the market. And this is one of the few weapons that has been available in the market since day one. So, DE hasn’t done this in a while. So, I’m guessing this is an early Christmas present. Now, getting the Corinth is a choice that I will leave to you. I’m not saying you should or you shouldn’t. It’s all a matter of your own choice. Now for me personally it’s a really good weapon. It’s a nice weapon. You can use it as a mastery fodder but that is also a decision for you to make. But just know that it’s not going to perform once again like the Tigris or the Tigris Prime and also let me know what you think about this weapon as well. If you’ve tested it out or if you have modded yours as well. And I’ll see you guys in the next one. 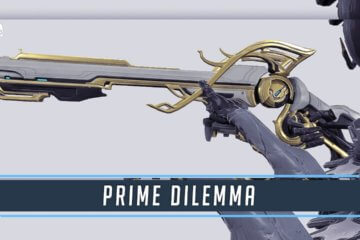 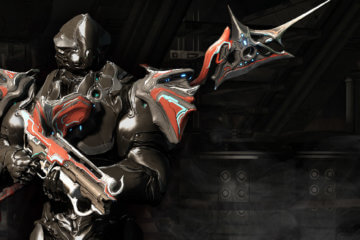 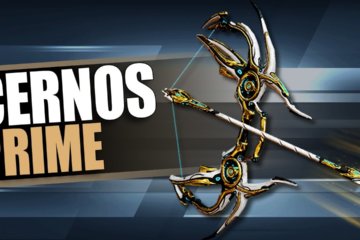