Hey guys! Welcome to another Warframe article and today I’m going to show you how you can easily get around 1 million credits in 1 hour without using a credit booster.

I think a lot of people either forgot about The Index Arena or they go really sick of it during the Glast Gambit quest line because it wasn’t handled very well. You had to do the arena far too many times, so most people just go to burn down on it. So, unless you are a complete potato and you lose every single match, you can easily make somewhere between seven hundred and fifty thousand credits to 1 million credit in just one hour. 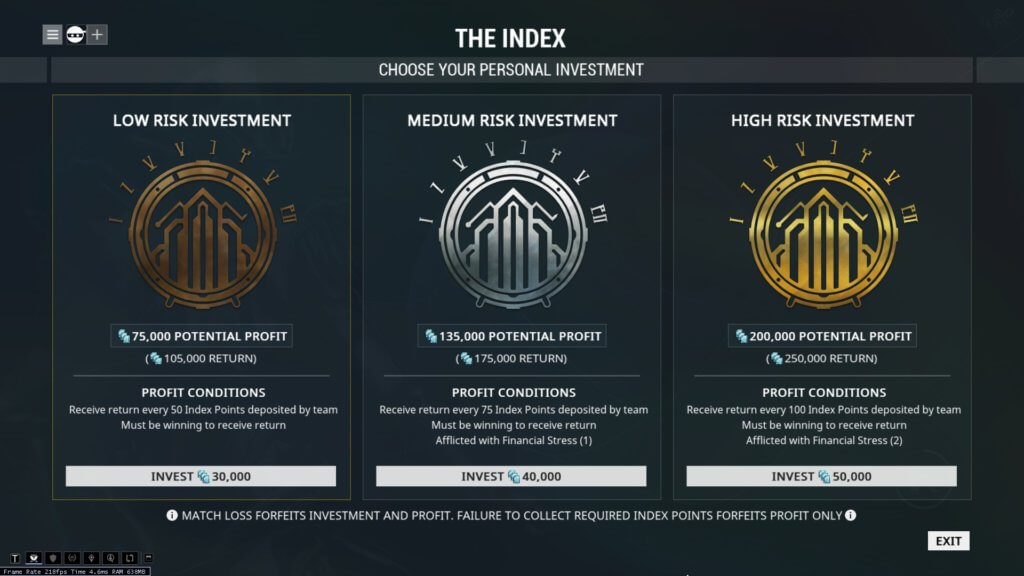 But please bear in mind that if you either lose or you don’t get enough points which are 25 for the lower risk investment, 50 for the medium and 100 for the high-risk investment, you will lose the credits that you put in.

Now the low-risk investment where you put in 30,000 credits and you walk away with 105,000 which is 75,000 credits profit is fairly easy. All you really need here is a decent weapon that can kill enemies that are around level 60. I would also recommend running this with a tankier frame, preferably Rhino or Nezha, because every point you carry is going to reduce your maximum health and it’s going to drain your energy. However, it will not affect iron skin or warding halo. So, you can pop up iron skin pick up like 40 points cash them in and tada you win.

Which is not really possible with other warframes, because the carrying around 30 points brings your health down to about 20. And this can be really dangerous because at that point you just get one shoot by everything. And if you’re carrying around like 30 points and you die, the enemies can pick up your point and cash them in. And this may become an issue because number one - they may just get more points than you and you lose, and number two - when you cash in points the timer goes up and when Corpus cashes in points the timer goes down. And if they manage to kill you and steal your first batch of points they will have a big lead and you won’t have a lot of time to catch up.

Now, an average one run is going to take you about five minutes but let’s just say six because sometimes it may take a little bit longer. So let’s just say you can do it 10 times in an hour and you get 75 thousand credits profit. So, if you don’t dare pout and lose of course, which you really shouldn’t in the low-risk investment, you can make about seven hundred and fifty thousand credits in one hour.

The medium risk investment where you put in 40,000 credits and you can walk away with 175,000 credits is a little bit harder but still fairly easy to solo. I would very much recommend running this with a tankier frame once again Rhino Iron Skin Build or Nezha build for Warding Halo are very much preferred. You can still do it with other frames but I would very much recommend a tankier frame because the damage here can be fairly high and don’t get me wrong if you’re amazing at dodging damage and you can do it with Banshee go right ahead. But bear in mind that if you lose you will lose the credit and you are fighting enemies that do very high amounts of unpredictable AoE damage.

Now, I wasn’t kidding when I said you’re going to need a good weapon because these enemies will be around level 80 to 90 towards the end and they will have high amounts of proto-shields and lots of them will have armor as well.

The medium risk investment on average took me about seven and a half minutes to complete but that is with selecting the map loading in and then loading out after I was finished so seven and a half minutes is kind of the worst case scenario here which means you can do it about eight times an hour and if you don’t dare pout and you don’t lose any of the matches this will grant you one million and eighty thousand credit.

And finally there is the high-risk investment where you put in 50,000 credits and if you win you will walk out with 250,000 credits. This one is really hard and I’m not gonna lie I never managed to finish this one solo, but to my defense, I never tried cheating it. I always tried to play it properly and I always run out of time. I would not recommend trying to do this one solo because you will most likely just lose your credits. Once you go past the fifty point mark the enemies will be very high level so they will have a ton of proto shields, a ton of armor, and they will be doing ridiculous amounts of damage and it’s going to be really hard.

But I would still recommend you tried at least once, take your best setup and if you can bring three of your friends that you know aren’t complete derps and try it out. Because while it’s not an amazing jump in terms of how many credits you’re going to get in an hour it’s still better than the medium risk. From what I’ve heard and read on the internet it takes about ten minutes to complete. So, you can do it six times an hour which would be 1,500,000 credits without a booster. And while as I said that’s not an amazing jump from the medium rate it’s pretty damn good.