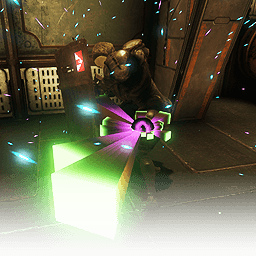 Octavia’s first ability is Mallet. Octavia throws a device towards a location that creates an invulnerable floating orb that plays music, more specifically, the Percussion section of her song. The Mallet will draw and absorb enemy damage. The absorbed damage is amplified and dealt to enemies around the Mallet as Blast damage. The damage is dealt based on the rhythm of the Percussion section, meaning it splits the damage between each note. 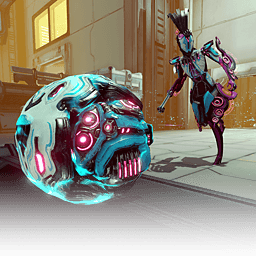 Octavia’s second ability is Resonator. Octavia launches an invulnerable rollerball that charms enemies around it, making them follow it. The more enemies are following the Resonator, the larger its charm radius becomes, up to a maximum. Resonator will plays the Bass section of Octavia’s song and will deal Blast damage to charmed enemies, based on the rhythm of the Bass, while they remain in range. The Resonator will be drawn towards nearby enemies that are not charmed. When the ability expires, enemies that were previously charmed will become momentarily staggered. 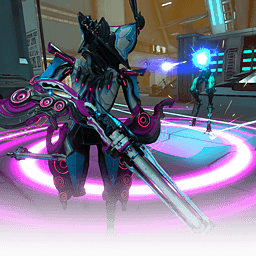 Octavia’s third ability is Metronome. Octavia creates an aura around her that plays the Melody section of her song for a period of time. Octavia and any allies inside the aura will gain an armor bonus. Additionally, Octavia and any allies inside the aura can perform certain actions in sync to the melody to gain several buffs. The aura has several rings of light that represent the melody’s notes. Each ring will start at the edge of the aura and will shrink towards Octavia, where it will disappear. The actions that must be performed have to sync with the moment where the ring is centered on Octavia, when a note plays. Each successful action performed in sync with the music will give the player that performs it a percentage towards a buff, seen at the top of the screen. The total percentage can lower or increase, depending on the timing. When it reaches one hundred percent, the buff will be gained. 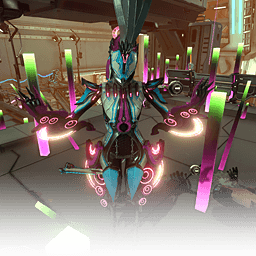 Octavia’s fourth ability is Amp. Octavia turns the ground into a sound field for a period of time. When inside this field, Octavia and her allies gain a damage multiplier that depends on the level of sound in the area. This multiplier has both minimum and maximum values. The level of sound in the area can be increased with Octavia’s other abilities, gunfire, footsteps, melee strikes, alarms and many others. If Mallet is active inside the field, it will have increased damage and radius.

Ability Strength mods affect the damage multiplier of Mallet, the damage of Resonator, the armor bonus of Metronome, the speed bonus of Vivace, the multishot bonus of Opera, the melee damage bonus of Forte and the minimum and maximum damage multipliers of Amp. Ability Range mods affect the radius of Mallet, the minimum and maximum charm radii of Resonator and the radius of both Metronome and Amp. Ability Duration mods affect the durations of Mallet, Resonator, Metronome and all its buffs and Amp. This concludes Octavia’s Warframe Spotlight. Thank you for watching and I will see you all next time.

So, all things considered, here are some builds you may want to try on your Octavia: